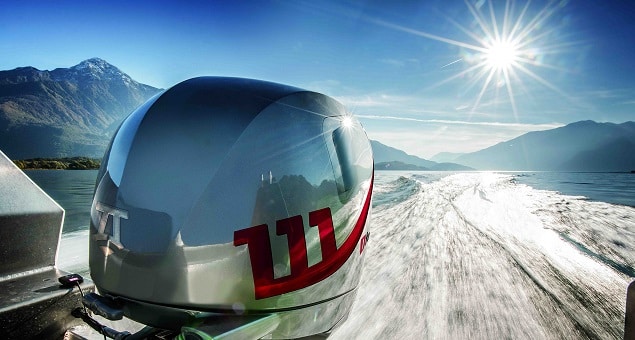 Outboard engines are the traditional propulsion for many boats, but environmental and technology changes are revolutionizing the sector.

Outboards are the most versatile and widely utilized engines, powering everything from small commercial fishing boats to the most exclusive superyacht tenders. The cheapest are small two-stroke versions costing a few hundred dollars, allowing poor fishermen in third world countries to eke out a living on the sea. The largest are used for mission-critical coastguard duties.

Yet they all have one thing in common—their emissions are polluting the planet. Beginning next year, several countries will ban the sale of cheap, carbureted two-strokes, though fuel injected models will remain legal. Now, even their more environmentally friendly four-stroke siblings are under pressure from a new breed of diesel outboard.

Diesel outboards are not new, but their technology and the changing requirements of boaters are. Leading outboard manufacturer Mercury was told by the US Navy, one of its major customers, that it was phasing out highly flammable gasoline on its ships in favor of diesel fuel only.

Reliability, longevity and vastly better fuel consumption are cited by another new customer, the US Coast Guard, as justification for current trials of the new Mercury, Cox and Oxe diesel outboards. For example, Sweden’s Oxe claims its diesel outboard consumes 42% less fuel than a comparable 200 HP two-stroke outboard.

Major inboard diesel manufacture Yanmar has partnered with German innovator Neander to produce an outboard with a claimed operating life exceeding 10,000 hours, a figure especially appealing to commercial vessel operators. A similar story is emerging from the superyacht sector, where the trend is away from gasoline outboards and toward safer diesel power.

Yet it’s early days for this new sector. Many detractors cite the significantly higher costs and poor power-to-weight ratios of diesels, though this is somewhat offset by higher torque. This limits these relatively heavy engines to larger craft. Complexity and lack of proven ability are other downsides. Another major criticism is the high emissions typical of diesels. On the other hand, the Neander-Yanmar complies fully with EU RCD2 environmental regulations.

Each of these new engines is notable in a different way, such as the unusual spark plug combustion of the Neander-Yanmar. Most powerful is the British-made 300 HP Cox CX0300. The firm partnered with Xenta System to create a joystick transmission to manage this large motor.

Global sales director Joel Reid told NauticExpo e-magazine that the motor will stand out from its competitors in more than just power. “Our CXO300 has been designed to perform against gasoline outboards, as our market is asking for high transient response and rapid planing. This is why we have incorporated a supercharger to get the engine going quickly.”

Interestingly, the Mercury 175 HP Optimax was developed by the company’s racing division, which says a lot about the expectations for and design of this 3.0 liter V-6 diesel. Oxe’s chief commercial officer Stefan Nybann told NauticExpo e-magazine that their diesel outboard is a 2.0 liter, four-cylinder turbocharged car engine with an advanced CANbus transmission, joystick controls and some unusual engineering. “We have our patented solution, the belt drive that transfers the power from the engine to the propeller shaft, allowing us to make full use of the power of a diesel engine at higher horsepower. The bevel gear system used in petrol outboards can’t over time stand the high torque that a diesel engine delivers. Only our belt drive system can do that.”

Read more about Outboard and inboard engines on NauticExpo website.