The class rules for the next America’s Cup define not only the boat but also how the game is played. Martin Fischer is head of design for Luna Rossa, the official challenger for the 36th America’s Cup that will take place in Auckland, New Zealand in 2021. He is the leading designer behind the new boat—and also the author of the class rules. In America’s Cup, everyone tries to bend the rules with great imagination and a ton of money to back it up. As a consequence, the class rules look like a massive legal document. No easy read! So, we asked Fischer to give us the short and simplified version.

NauticExpo e-magazine: Why was a monohull chosen over a multihull?

Martin Fischer: When the switch was made to catamarans, we saw a huge development in multihulls. In just two America’s Cup cycles we reached a speed, especially upwind, that was unrealistic before. Nobody could even imagine that we could go so fast. I believe that a part of the motivation was to do a similar thing to the development of monohulls—to boost high-performance monohulls.

The basic concept is a foiling boat that doesn’t rely on manual power to fly. Everything under water will be powered by batteries.

NE e-mag: Could you quickly explain the most important features of the new AC-75?

Martin Fischer: The basic concept is a foiling boat that doesn’t rely on manual power to fly. That’s a big difference from last time. On deck, there will be normal maneuvers for a high-performance racing boat—or similar to normal. But everything under water will be powered by batteries. So, that’s the basic concept.

The other big change is that the biggest part of the rule is open. Each team can design their own hull, their own sail shape and so on. This means that the boats from the different teams will probably look very different. Last time, basically everything was one design. The big design work was done on things that you could not see—mainly foil shape and control systems. You could only see the consequences, not the design itself. From the outside, all the boats looked the same. This time it will be an open development class. And that will show.

NE e-mag: When you look at the long foils that are sticking out, and imagine close and aggressive match racing, it could be very dangerous. What safety considerations are implemented in the class rule?

Martin Fischer: In normal racing rules for sailing, you must avoid contact with other boats. If it happens, one of them will be punished or disqualified. We will push this a bit further. There will be an electronically managed zone around each boat. If these zones overlap, it will be considered a collision. The size of this zone can be adjusted. During the first races, it will be fairly big, to make sure that nothing happens. As we get more experience it will be adjusted. This decision will be made by the race director. 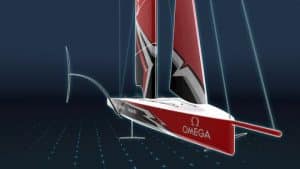 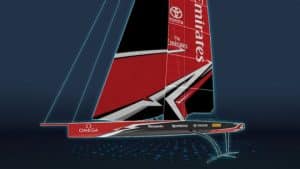 NE e-mag: The AC-50 catamarans from the last cup were mainly controlled by software. The best sailors in the world were basically reduced to grinders, or power suppliers. In what way will that change?

Martin Fischer: The control of the boat this time will be done by humans, not machines. It will not be driven by any kind of autopilot. Last time, the kiwis invented a system they called “follow the dot”. They basically had an autopilot that showed how to adjust the foil angle. One of the crew members simply had to follow the instructions. This time the rules are written such that this will not be possible. The idea is to have a boat that is controlled by humans. Not machines.