French yacht building giant Beneteau is re-launching a new armada of boats including its race-winning line of cruiser-racers, First. They will be presented during the Cannes Yachting Festival from September 11-16 in southern France.

The iconic brand of cruiser-racers First is relaunching with a combination of new designs and the acquisition of Slovenian builder Seascape while Beneteau’s main Oceanis range is being redeveloped. It is not all good news however as the company’s luxury range Sense is being dropped this year.

“Our majority shareholding in Seascape means that all their boats will be transformed into our First range.”

“Our majority shareholding in Seascape, which was founded by two successful mini transat sailors, means that all their boats will be transformed into our First range from September 2018,” explained General Manager Gianguido Girotti in an interview with NauticExpo e-magazine before the opening of the Cannes Yachting Festival.

Beginning with the 18 model, Seascape has expanded the range to include a 14, 24 and 27 model; all designed by Fast 40 and Imoca designer Sam Manuard. “That is part of the rebirth of First; the second part is the launch next year of a performance-oriented boat as part of the First Yacht range, it will be over 50 feet. We are also thinking of a 35-foot model that could be used for double-handed racing.”

This new range will mean the removal of the popular First 25 which has introduced thousands of sailors to yachting. “These are all lifting keel yachts so easily transportable but most of all, fun to sail,” said Girotti.

With the DNA of the lively and rugged mini transat boats these twin ruddered hulls with quick rigs are designed for a wide range of sailors. “Our aim is to give as much performance to these boats while bringing as many people into the water, starting with the 14-foot First dinghy.” These ultralight vacuum-infused hulls are manageable on their trailers and at sea with useful cruising accessories such as cockpit tents. 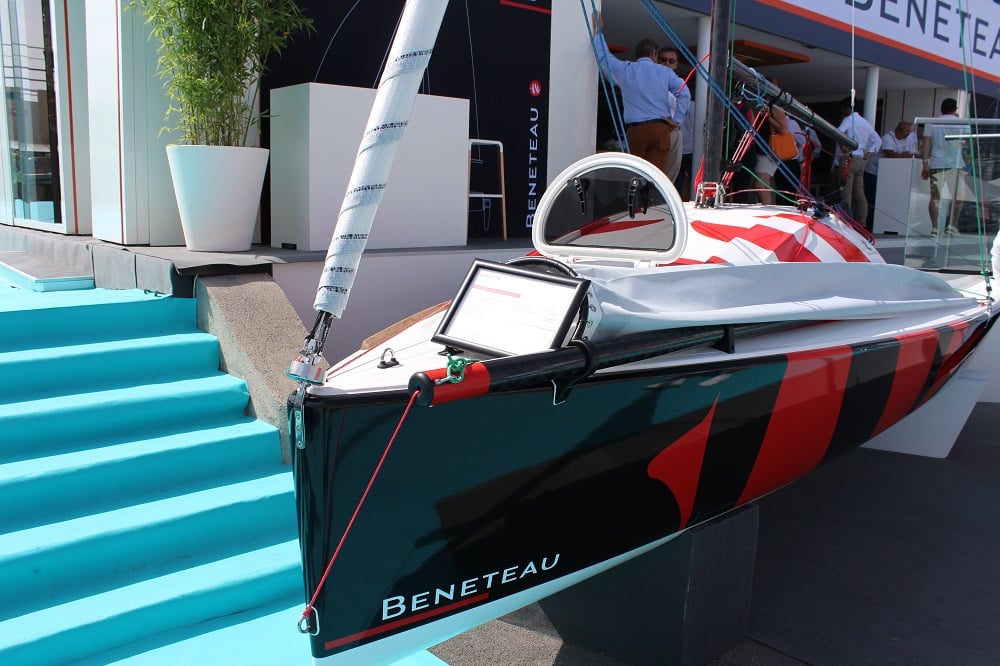 As reviews have shown on the 27 model, performance is attained without the white-knuckle ride of traditional sports boats. Beneteau’s other newer performance boat, the foil-assisted Figaro 3 is selling well with 50 hulls ordered—including one for Australia—and will complement the new range.

The dedicated cruising range, Oceanis, is also being expanded along with the larger Yacht range that currently only has the 62 model.

Meanwhile production is ramping up for the latest models, with the 46.1 making its debut at Cannes and the 51.1 also being launched. “These are fast cruisers with performance options and deep lead keels so these Seventh Generation Oceanis offer more than the previous editions,” said Girotti.

A walk-through of these models by NauticExpo e-magazine showed slick design with clever accessories such as retractable davits while also claiming the largest owner’s forecabin on the market and better stability because of lead instead of cast iron in the keels.