{Dubai Show} Craft Your Own Superyacht 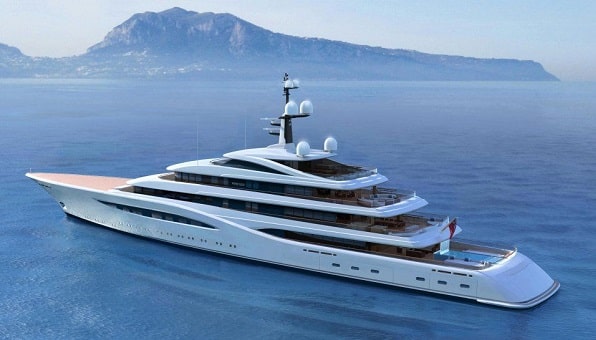 Custom took on a whole new meaning at the Dubai International Boat Show with Feadship. The Dutch company builds beautiful bespoke superyachts and is popular among high-net-worth individuals. At the show, they demonstrated how bespoke works by incorporating the customer’s individuality, called the Feadship DNA, that forms the basis of creating their dream superyacht.

A customer got her superyacht concept sketched live by one of the Feadship designers. The designer listened intently as the customer discussed her idea of a dream swimming pool and lounge area as he captured those possibilities by putting pen to tablet and depicting the progress on the screen.

Farouk Nefzi, marketing and brand director said: “We challenge the notion of custom. Many customers think that it’s about getting to a shipyard to choose a model of a craft which is then tweaked according to their requirements. At Feadship, however, we navigate a different route. Custom, for us, means starting from scratch. We understand the Feadship DNA of our customer, create a design brief which forms a foundation by sketching their favorite Feadship.” Upon design conception, Feadship’s in-house designers and naval architects translate the design into layout practicalities, such as the location of the engine rooms, the master bedroom, the owner’s deck and the bridge deck, after which the engineering is done in Holland itself.

Last year, six superyachts ranging from 35 to 97 meters were added to the Feadship family. Their 97-meter “Faith” won several awards at the Boat International Design and Innovation Awards, including one for interior design and deck design. Only recently, the company introduced its fourth Feadship yard in Amsterdam to cater to the increased demand for superyachts. Once it is completed at the end of 2018, they will be able to build new superyachts of up to 160 meters.