Home » News » RALamander to the Rescue

The vessels—with the project name RALamander—are specifically designed to address the security and safety needs of modern ports. Robert Allan (RA) specializes in response vessels, particularly fire-fighting ships (fireboats), which it has built for major ports in North America and Asia.

Speaking to NauticExpo e-magazine, RA European customer relations manager, Sami Uotinen, explained: “Our collaboration with Kongsberg is to develop a radically new, remotely-operated fireboat that will allow first responders to attack dangerous port fires more aggressively and safer than ever before.”

“Fires involving containers, petrochemicals, shore-side structures, or vessels with an explosion risk or emitting toxic smoke, are hugely dangerous in ports. They may delay, or even prevent, manned assets from responding effectively. The un-crewed RALamander will offer in-close fire-fighting and an ‘eye in the fire’ capability that keeps marine fire-fighting professionals out of harm’s way. RALamander can be deployed on its own or serve as a force multiplier with conventional fire-fighting assets.”

Kongsberg’s control & communications system will feature a high-bandwidth, low latency wireless link to a semi-portable operator console that can be located on a manned fireboat, or a vessel of opportunity. Like other Kongsberg autonomous control systems, the one being developed for RALamander will allow for a range of configurable, future-upgradable autonomy levels to suit an operator’s or a port’s evolving needs.

Uotinen stated that RA and Kongsberg expect to see the first vessel launched and commissioned within the next four years. “The first in the series will be the 20 m-long RALamander 2000, equipped with fire-fighting (FiFi) grade 1 capability, with a total pumping capacity of 2,400 m3/hr with optional foam.

“Though it’s designed to work close up to fires, RALamander is not built with any special material, but it will be equipped with a spray system to protect the hull and components,” Uotinen added. “We are also working on a higher speed, a 15-16 m-long variant.” 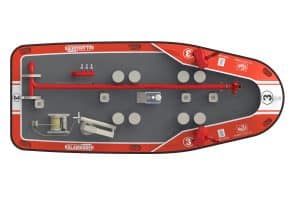 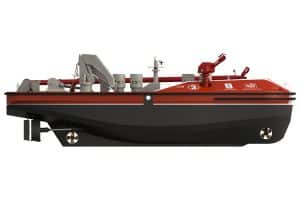 “RALamander 2000 will have a retractable mast that can bring one of the three monitors to a high point of attack for shipboard or dock fires. We plan a range of automatic fire-fighting functions, including dynamic positioning, water spray target holding, and ‘line protection’. With the latter, RALamander automatically moves back and forth along a line while directing protective spray cover on shore structures or vessels threatened by a fire.”

A low-profile design also makes it possible to attack under-wharf and marina fires remotely. “If a burning vessel poses a threat to its surroundings,” Uotinen continued, “RALamander can be used to tow it a safe distance by means of its ‘grapnel emergency towing’ system.”

Finally, the vessel’s versatility may also offer new ways to obtain, maintain and operate port fire-fighting assets. “Since RALamander can be operated from a safe stand-off distance during an incident, and personnel are less exposed to risks,” Uotinen concluded, “commercial entities such as tug or pilot vessel operators could be in a position to offer fire protection services to a port.”