Home » The New Targets of the Radar World

The New Targets of the Radar World

While a chart plotter can show where everything around is supposed to be, nothing beats a radar for navigational safety. The basic principle of radar operation is based on the fact that radio waves are reflected by objects. Because propagated electromagnetic waves are traveling through air at a constant speed, it is possible to determine the distance between an object and the radar.

Electromagnetic waves were first described in 1865. However, the knowledge and technology of radar as we know it today is created through an accumulation of many developments and improvements. This continued evolution leads to extra features, more accuracy and lighter weight solutions.

The Quantum Raymarine-FLIR radar is a next-generation radar with CHIRP technology. CHIRP is perhaps the most significant radar advance in recent years. By applying mathematical techniques to conventional pulsed radar, range and resolution can be increased while using less peak input power. 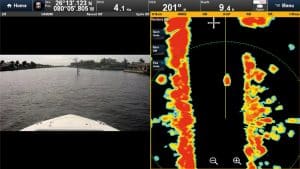 Raymarine took advantage of this technique. It results in outstanding close-range detection and improved details at minimum distance of 5.4 meters. The Quantum radar simplifies installation through integrated WiFi and thin cables. Its lightweight design weighs approximately 50% less than equivalent radar and the low power consumption (17 W transmitting and 7 W standby) guarantees extended battery use and a safe level of radiated emissions.

The new Furuno DRS4D-NXT solid-state pulse compression Doppler radar packs the performance of an open array radar in a compact 24” radome. This concept gives no advantage in terms of low power consumption, but it excels with striking features. It is the first radar in the world using the new Furuno Target Analyzer function. Approaching targets automatically change color to help you identify them. Green color targets are stationary or are moving away. Red targets are hazardous or moving toward you.

Also a new RezBoost technology is incorporated into the DRS4D-NXT. RezBoost creates beam sharpening, equivalent to 2 degree beam width open array. Like the larger DRS6A model, the DRS4D also has bird mode, which helps you identify birds gathering around schools of fish at the sea surface. And the innovation doesn’t stop here: With the new DRS4W Furuno launched world’s first wireless radar that you can access directly from your iOS devices.