VOCs—volatile organic compounds, the gases evaporating from oil cargo tanks—are a waste product from crude oil handling and transport that represent both a hazard and a loss of revenue to oil and gas producers and shippers. Typically, VOCs are either discharged into the atmosphere or burned off. But with the development of this new fuel mix for dual-fuel (LNG and diesel) engines, VOCs can be turned into a viable source of energy.

The potential is savings of around 4,000 tonnes of fuel per year for a shuttle tanker.

The first application of what WinGD and Wärtsilä describe as “ground-breaking technology” will be to power two 125,000 dwt shuttle tankers being built by Samsung in South Korea for Singapore-based AET Tankers.

Under a contract worth over 30 million euros, WinGD will supply the two-stroke X-DF main engines, while Wärtsilä’s scope for each ship includes the VOC recovery plant, fuel tank, and fuel mixing unit, plus two four-stroke 34 DF dual-fuel auxiliary engines.

The equipment is scheduled for delivery to Samsung’s yard this fall; the vessels will be delivered in 2019 and 2020.

The 277-meter-long tankers will operate on long-term charter for Norwegian state-owned energy company Statoil in the North Sea. They will use LNG as their primary fuel, with VOCs mixed with the LNG. WinGD and Wärtsilä have proven that this fuel mix will not only run the former’s X-DF main engines, but also the latter’s 34 DF auxiliary engines. 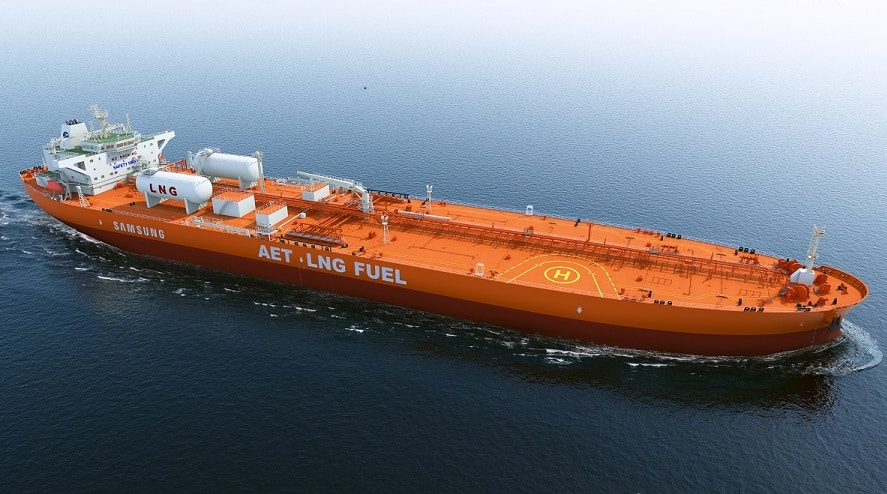 Speaking to NauticExpo e-magazine, a Wärtsilä spokeswoman confirmed: “Yes, of the six new VOC recovery systems, four are with Wärtsilä dual-fuel engines. In terms of fuel saving and payback, the potential is savings of around 4,000 tonnes of fuel per year for a shuttle tanker. Assuming the current LNG fuel price of USD 500/tonne, a payback of six to seven years is possible.”

“This is in addition to the environmental benefits,” she added, “which include a significant reduction in CO2 emissions. We believe that this technology will ignite the interest of tanker fleet owners around the world as well as the oil & gas industry.” She explained that the new fuel mix underwent full-scale tests: “We used our facility in Bermeo, Spain, for the four-stroke tests, and our Trieste, Italy, facility for the X-DF two-stroke engine tests.”

Using up to a 20% VOC mix, those tests demonstrated the engines’ capabilities under various load scenarios. “They sustained high performance throughout transfers from pure LNG to the VOC mix, as well as transferring to diesel mode and back again. Notably, while maintaining efficiency, NOx emissions remained significantly below IMO Tier III levels while operating on the LNG-VOC mix.”

Wärtsilä and WinGD invited representatives from AET and Samsung, as well as from the OSM Maritime Group, Statoil and Hyundai Heavy Industries to Trieste to witness the tests. WinGD’s DF technology R&D senior project manager, Marcel Ott, commented: “An early finding on the first X-DF engines with low-pressure gas admission was that their inherently stable combustion gave scope to run the engines on gas. Working with our partners from Wärtsilä Gas Systems and the team at Trieste, we’ve applied this knowledge to develop the new fuel technology.”

“Importantly, to burn the LNG-VOC mix, the X-DF engine concept remains unaltered with no significant changes in performance and emissions behaviour—the engines are fully IMO Tier III compliant burning the LNG-VOC mix. Neither hardware modifications nor application-specific control functions are required, and standard tuning can be retained.”

Ott concluded: “It was also established during the project that, in contrast to a high-pressure system, the X-DF engines’ low-pressure gas admission is beneficial for mixing VOC with the natural gas fuel, since condensation of the heavy hydrocarbons in the VOC can be avoided.”

WinGD has won the Marine Propulsion Emissions Reduction Award at the Sulphur Cap 2020 Conference on 17-18 April in Amsterdam. Sponsored by DNV-GL, the award is given for an innovation: “that can demonstrate actual or potential reductions in emissions as a result of its implementation.”