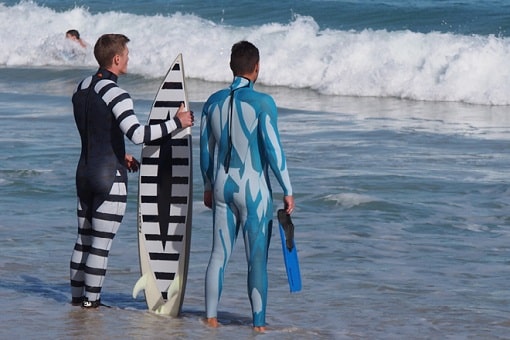 Recent research shows that sharks have much better eyesight than previously thought, and that vision plays a crucial role in hunting prey.

In response, Australian wetsuit manufacturer Radiator has incorporated certain colors and motifs developed by Shark Mitigation Systems (SMS) into its Shark Deterrent line. The camouflage models are designed to hide wearers from predators by blending into the background. Those with contrasting stripes are meant to convince sharks that the wearer is not suitable prey.

The University of Western Australia conducted tests with baited neoprene exposed to several species in Australian waters. The most recent trials involved great whites off South Africa. There, the sharks engaged unbaited suits with disruptive coloration after five or six minutes, compared to only 90 seconds for black neoprene gear. This could give a diver time to leave the water. While no statistically valid data were collected for suits with contrasting bands, SMS recommends these models for surfing, swimming and shallow freediving.