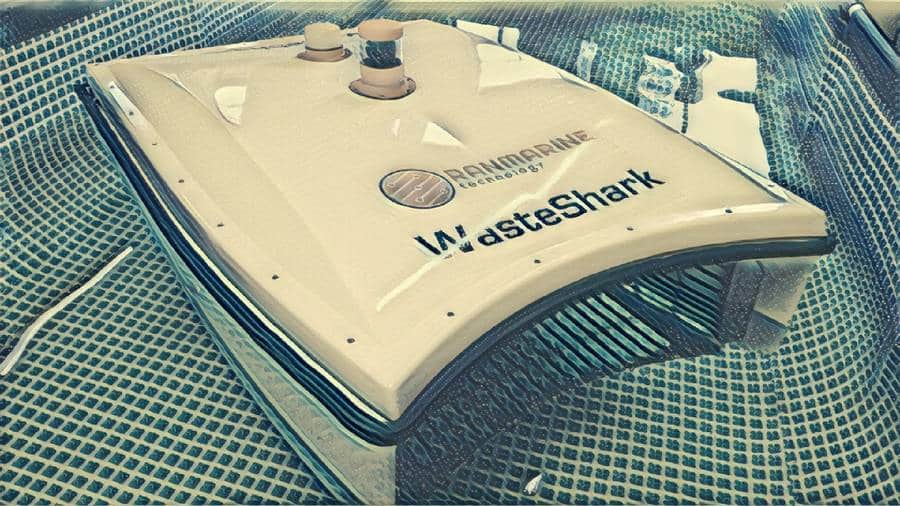 Drone technology has been predicted to change our lives in ways it’s hard to imagine today. Some good, some bad—some probably even very bad. But on the bright side, there are things like the WasteShark.

The scourge of ocean plastic pollution is an increasingly important topic at METS as well as at many other boat shows (Also read our article about Le Grand Pavois). That’s what the WasteShark is for. It has one job, and one job only: to scoop waste up from the ocean with its big mouth.

Most of the catch will obviously be plastic, but it can eat other things too: any trash floating around will be scooped up, and so will alien marine vegetation and unwanted growth. The producer, RanMarine Technology, is a Dutch company, specializing in drones. The WasteShark is their main product. Like most good designs, the inspiration comes from nature. The whale shark is the biggest fish in the world and also the most efficient harvester of biomass. The shape and efficiency of the drone is highly inspired by the whale shark.

Like any good shark, the WasteShark has a fine nose. The company describes it as a learning machine, continually collecting data about its environment. Any significant presence of pesticides or oil contamination in the water will be picked up by sensors.

So not only waste, but also valuable information about the state of the ocean (or lakes and rivers) is scooped up. The shark can even measure temperature and record video of the seabed. The goal is to build a huge database over time, and help organizations direct an even more focused environmental effort in the future.

Waste is scooped up by WasteShark. (Credit: RanMarine Technology)

The construction is fairly simple—at least on the exterior side. Essentially it’s a catamaran with a basket between the hulls and a large mouth out front. There are two versions: one is automated, more or less like a robot vacuum cleaner, and will bump it’s way around and learn as it goes. The other one can be navigated with a remote control.

Propulsion is of course electric and the power is solar. It can be charged on the AC grid as well and after a night in the charger, it’s good to go all day. The main areas of use are harbor areas and river outlets. In one of their presentation videos, Richard Hardiman, CEO of RanMarine Technology, explained that heavily polluted marine areas in developing countries, for example India, can also benefit greatly from the little machine. He said:

In Mumbai, where we work quite a lot, the basket is typically full in five minutes. Other places it’s often more like an hour or so. When the basket is full, the shark returns to the base, empties the basket, and swims back out for more.

He continued: “We call it an ‘at-source solution’ because it removes the waste from locations where tides, currents or waves tend to accumulate it. But of course, the real at-source solution would be to have people not throw garbage in the water in the first place.”