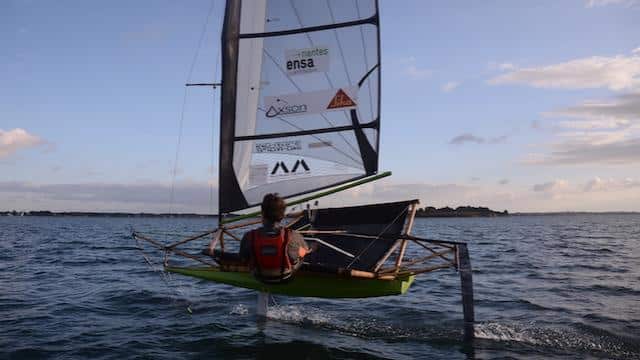 The Bamboo Boat is the new foiler conceived by a team of seven young French people and whose structure is entirely of bamboo. The goal? Prove that it’s possible to construct a “flying boat” at reduced cost and using environmentally sensitive materials. We talked to naval architect Guillaume Dupont, initiator of the project.

NauticExpo e-mag: How did the project begin?

Guillaume Dupont: It started as a student project when I was studying naval architecture in Nantes (France), along with fellow student Basile Mayet and a carpenter friend, David Burban. Other friends quickly joined us; today there are seven of us working on it. For our final project, we wanted to build our own foiling boat. We quickly ran into an obstacle—constructing such a boat of carbon fiber and other commonly used materials is very expensive.

The large bamboo growing around Nantes gave us the idea to use this material. We began designing at the end of March 2016, followed by construction in mid-April. Initial launch of the boat was in August.

Which parts are of bamboo and which aren’t?

Guillaume Dupont: The framework is entirely of bamboo. This tubular structure supports all the loads, from the rigging to the foils and other appendages. The bamboo elements are joined with linen fiber impregnated with biosourced epoxy resin, which means it’s partially plant-based.

With the bamboo, the material is right where we need it—around the outside (Courtesy of World Bamboo)

We made the float of standard materials because of cost and time constraints, using polystyrene foam and fiberglass. Without a float, the boat would sink when not foiling.

We decided to make the foils of carbon because our primary goal was to test the bamboo structure. But the foils also could be bamboo, which is what we now want to do. But our main goal was to test the framework and not go off in too many directions at once. The foils are the most complicated elements because they’re precision parts.

Did you keep the naturally hollow structure of the bamboo?

Guillaume Dupont: Absolutely. The advantage of bamboo is its tubular shape. The tube is both mechanically and geometrically attractive in that its hollowness offers lightness and mechanical strength. Nature has handed us a terrific material. This isn’t the case with wood, like oak, which is also very sturdy, but very heavy.

“The advantage of bamboo is its tubular shape. The tube is both mechanically and geometrically attractive.”

With the bamboo, the material is right where we need it—around the outside. That gave us our tubular structure. Generally, boats aren’t made from tubes, but from flat elements. We wound up with an open-work hull.

On the other hand, we didn’t use the entire length of the bamboo, which reached 12 or 13 meters. Our boat measures 3.3 meters, so we used pieces of bamboo about two meters long and 25 to 60 mm across.

Why did you choose to build a foil?

Guillaume Dupont: Because it’s the current trend and only available to a technical and financial elite, since carbon is expensive. Today’s foiling boats are in the super-elite, high-performance category. We wanted to prove that you can build a foiling boat relatively cheaply with ecological materials, even if it’s heavier and slower than a carbon Moth. Of course, carbon fiber is mechanically the best. It’s light, resistant and rigid. But bamboo isn’t bad either. For example, it’s better than steel. 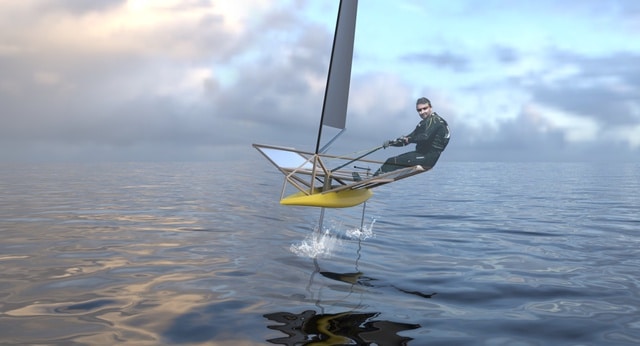 How fast can the boat go?

Guillaume Dupont: Until now, we’ve been in the test phase and have concentrated on the boat’s stability. We’ve gone as fast as 15 or 20 knots, but could theoretically go faster. Moths can reach 30 knots.

What are your next steps?

Guillaume Dupont: We’d like to continue in the same vein and build a foiler that is entirely biocomposite, foils and float included. We’re considering several options, including bamboo fiber, wood or linen fiber foils. The goal is to put a product on the market. But it wouldn’t be a Moth, which is technically difficult to sail.