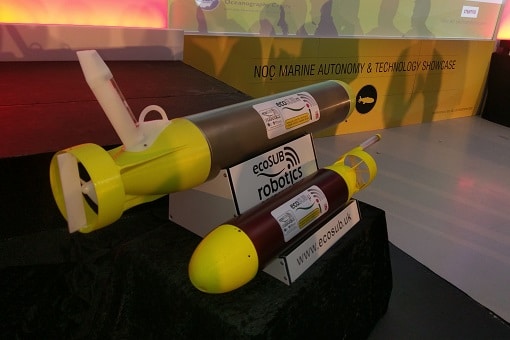 A British consortium has manufactured the first robotic “micro subs,” about one-third the size of most conventional autonomous underwater vehicles (AUV). The innovative ecoSUBm and the smaller ecoSUBμ are compact and simple enough to be launched from robotic surface vessels without human intervention. At about 50 cm long, they are economically and environmentally more efficient than their larger counterparts.

Equipped with sensors, they could be used for frequent corrosion and leak monitoring of pipelines and other infrastructure. One of the most innovative aspects is the ability of a group of micro subs to work together. They could create high-resolution 3D maps of the underwater environment that are more complete than those of a lone AUV. They can survey hundreds of kilometers very quickly.

This project is led by Planet Ocean in collaboration with the National Oceanography Centre (NOC), ASV Ltd. and The University of Southampton. A Planet Ocean spinoff, ecoSUB Robotics, has been formed to concentrate on the development and manufacture of these unusual vehicles.