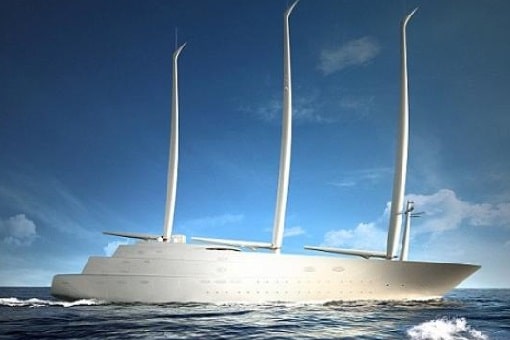 The naval shipbuilding company Privinvest, headquartered in Lebanon, recently announced the delivery of Sailing Yacht A—the “most advanced sail-assisted superyacht ever built.” The giant vessel measures 143 meters and weighs in at about 12,600 GT, making it one of the largest superyachts in the world.

The Sailing Yacht A features hybrid diesel-electric propulsion and a state-of-the-art navigation system. Its three masts are the tallest, most highly loaded freestanding composite structures in the world. The mainmast stands about 100 meters above the water. The ship also features an underwater observation pod.

Well-known designer Philippe Starck created the unusual design, aimed at challenging conventional aesthetics. According to Iskandar Safa, founder of the Privinvest Group, “Sailing Yacht A is a true revolution in the naval industry, she is the first of a new generation of ships embodying modernity, breaking both engineering and design boundaries.”