Home » Smooth Sailing for the Wes Amelie’s Conversion to LNG

Smooth Sailing for the Wes Amelie’s Conversion to LNG

Financially backed by Germany’s Federal Ministry for Transport and Digital Infrastructure (BMVI), the conversion aims to promote LNG in the country’s shipping industry. BMVI has pledged to subsidize both new builds and conversions of oceangoing vessels.

The modification slashed Wes Amelie’s SOx emissions by about 99%, NOx by 90% and CO2 by up to 20%. Classed by Bureau Veritas, the vessel now meets both Tier II and Tier III emission requirements set by the International Maritime Organization. That’s vital to its operation on North and Baltic Sea feeder routes, where emissions control areas (ECAs) have stringent limitations.

At Europort 2017 in Rotterdam, Wessels signed a letter of intent with MAN to convert three of Wes Amelie’s sister ships to dual-fuel operation. Sixteen of her 23 sister ships are structurally identical, making for cost-effectiveness in follow-up projects. 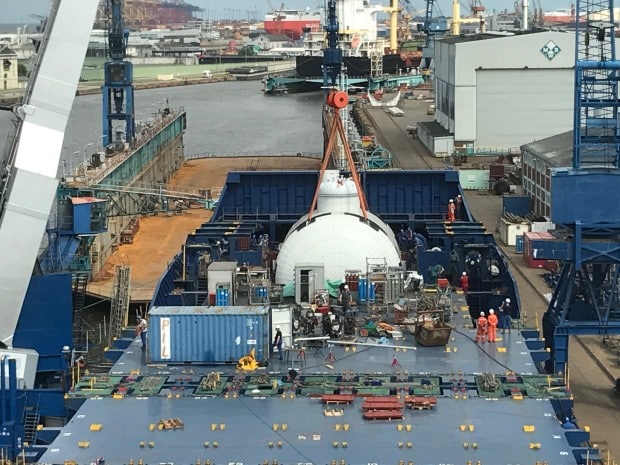 “Additionally, our CSO Wayne Jones recently announced that MAN Diesel & Turbo will grant a two million euro discount, to be split over 10 upcoming LNG retrofits. And that has naturally attracted additional attention.”

The conversion went “pretty smoothly,” said MAN PrimeServ’s upgrade & retrofit project manager Marcel Lodder. “We’d performed such conversions—a 48/60 engine to a 51/60DF engine—on stationary engines, so were confident about the technical details. Naturally, we needed to do some engineering beforehand, since a vessel is different from a plant.” One of the major challenges was the lack of space in the ship’s engine room. “As we were working with other parties during the conversion, it took quite some logistics to manage everything smoothly.”

The Wes Amelie is now in service. “Since this was the first application with a single-propulsion vessel in combination with a diesel-mechanical drive, we are very pleased to see extraordinarily good results.”

Looking to future conversions, MAN Diesel & Turbo has acquired fuel gas supply systems (FGSS) specialists MAN Cryo. “We think that offering a combined solution—engine conversion plus FGSS plus bunkering—will be more attractive to customers,” Lodder explained. “They will then only need to coordinate with one project manager.”

Apart from green credentials, Wes Amelie’s conversion has produced other benefits. “We expect the price gap between diesel and gas to grow,” Pissarski said, “so it becomes more cost-efficient for operators. Engine maintenance will also be reduced.”