Sweden-based CIMCO announced during Sea Work Asia that its OXE diesel engine will be distributed in China—important news for an interesting piece of technology.

The OXE was launched commercially in 2016. This high-performance diesel outboard differs from its competition by its design, as it relies on a marinized diesel motor design that was originally created for the automotive industry. According to CIMCO, its key features are its low fuel consumption and drag.

The Swedish company got a boost recently from fellow Nordic giant Hurtigruten, which ordered 15 OXE engines for tender boats used with one of its Antarctica cruise ship. 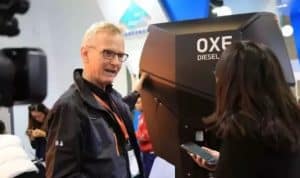