Home » Wake-up your Super-Yacht Guests with a Super-Toy

Wake-up your Super-Yacht Guests with a Super-Toy

NauticExpo e-magazine takes to the water to test the all-new RÄVIK board from Awake—a power packed electric machine “that provides the riders with an amount of adrenaline that will keep them awake for the next 24 hours,” as described by the Swedish company.

September in Europe is highly anticipated by the nautical industry. There are a number of trade shows and events which reveal new and exciting products of the future, an absolute stand out this year being the new RÄVIK board from Swedish company Awake Boards. This month, we invited Awake to our offices to talk about the new sport of Jet Boarding and how these revolutionary products are shaping the nautical leisure industry.

An awesome mash-up between surfing, wakeboarding and jet-skiing, it’s all and also none of the above. The loosely agreed upon industry term of “Jet Boarding” for the time being at least best describes the sport, where essentially an individual rider stands on the board and is propelled with a self-enclosed propulsion system. With electric motors leading the way, high speeds can be obtained with some companies boasting over 60 kmph ( 30+ knots), with a varying range of materials and interesting options such as hydrofoils available on the market.

The RÄVIK Awake Board has been making big splashes on social media platforms. (Credit: Awake)

As one of the clear market leaders in this up-and-coming sport, the RÄVIK board from Awake has been making big splashes on social media platforms (for example Instagram @awakeboards) and grabbing attention at trade shows such as the Cannes Yachting Festival, with awesome videos of the product being tested on open and closed waters as well as performing at high speeds. While having a high price tag, the RÄVIK has clearly been meticulously designed and has an extremely high-quality finish. Boasting a carbon fiber body, the board weighs only 35 kg and is very stable when floating in the water (unpowered) with and without the rider on-board.

A very thorough initiation helped us understand the functionality and safety features of the board, the most impressive being the intelligent magnetic leash system which is attached to the rider’s impact vest and one of two magnetic receivers (depending on the rider’s riding preference) towards the nose of the board, meaning as soon as the rider comes off the board (voluntarily or not) the power is disconnected and the board comes to a halt very quickly.

Starting on the belly in a classic prone surf position with the legs trailing behind the board, rather than paddling the rider can control the speed of the board with the wireless remote. With no danger of losing any limbs in the motor due to the impeller system, after obtaining enough straight line speed you simply pop up either like on a surfboard or alternatively with the help of one of the tactically placed handles. The detachable bindings can be used for the feet to help with stability and turning the board and can be easily adjusted to suit different riders. 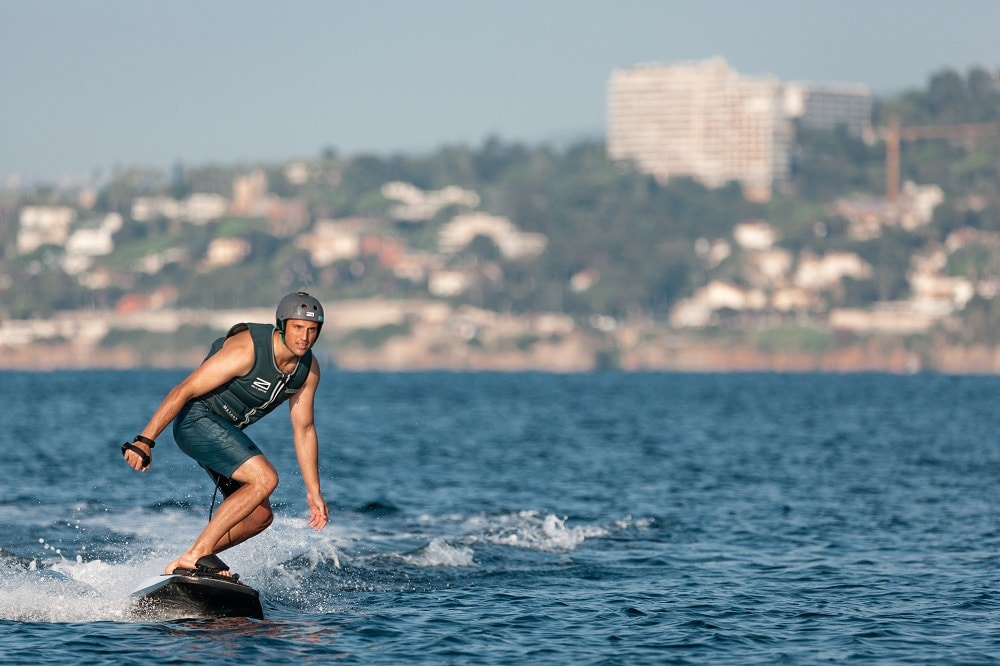 One of the more difficult techniques to learn was the synchronization between throttle (in the hand) and balance. (Credit: Awake)

One of the more difficult techniques to learn was the synchronization between throttle (in the hand) and balance. Once the brain was convinced that more speed meant more stability, the bails and falls became far fewer and some serious riding took place. After completing the basics we came ashore and with a few clicks of a button using AWAKE’s own smartphone application, SPORT mode became EXTREME mode and the raw power of the board was unleashed. 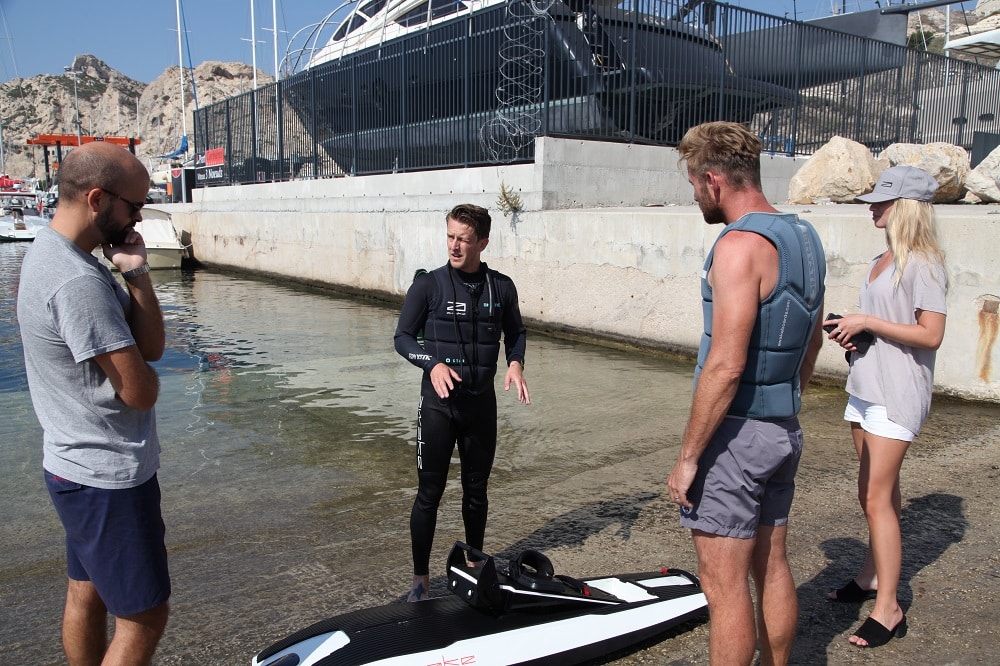 Our team took to the water to test the all-new RÄVIK board. (Credit: Valentine Jaque)

After just under an hour of mixed-riding the indicator lights signaled the battery was coming to an end and the safety mode kicked in which meant a low-power thrust could still be used to get back to base.

An absolute delight to test such a highly tuned product, it’s clear the technology used to create this board such as the brushless electric motor has a lot of potential for use in other applications, both nautical and other.