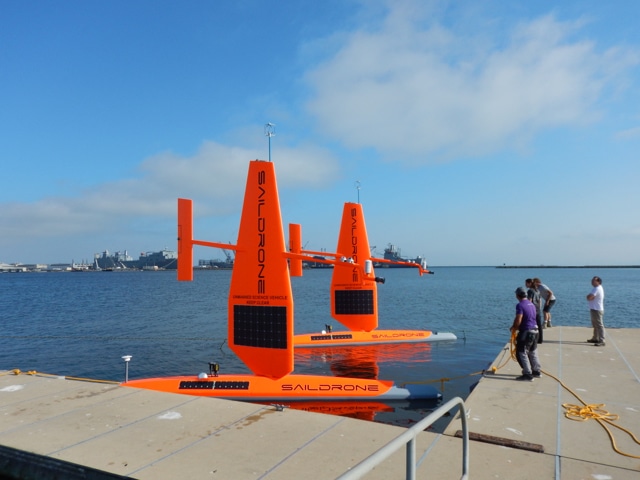 Cross an autonomous sailing drone with high-tech sensors and what do you get? The latest in cost-effective, remote ocean data collection. Britain’s Delta-T Devices recently announced that its SPN1 Sunshine Pyranometer is being used aboard two autonomous sailing craft created by the California’s Saildrones. Resembling torpedoes with outriggers, the drones left San Francisco Bay on September 1 for a six-month scientific mission to the equator and back. The voyage is part of the Tropical Pacific Observing System, a project run by the US government’s oceanic and atmospheric research division.

The wind-powered craft travel at three to five knots. Launched from a dock, they can be programmed from afar to sail a particular pattern or hold station. Saildrones can carry a wide variety of instrumentation, including cameras. According to the company, Delta-T’s patented pyranometer precisely measures solar irradiance, needs no routine adjustment, works at all latitudes and offers other advantages over traditional instruments. The Saildrone-SPN1 combination should significantly lower the cost of ocean research. The current mission is designed to test the accuracy of drone-borne meteorological measurements compared to data recorded by ships and moored stations.