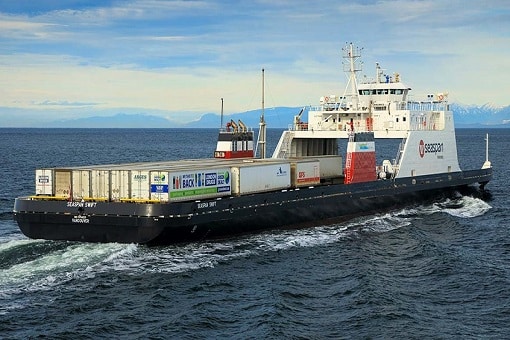 The Seaspan Swift and Seaspan Reliant—148.9 m long and 25 m wide—are the first of five SFC plans to buy. They were designed by Norway-based Vard Marine, built by Sedef Shipbuilding in Turkey, and classed by Bureau Veritas. These cargo-only ferries can accommodate 59 trailers. SFC operates out of five terminals in British Columbia and delivers over 50% of all cargo to Vancouver Island.

Speaking to NauticExpo e-magazine, SFC’s new president, Steve Roth, said the three additional ferries would not necessarily be of the same design.

It’s too early to tell; the same applies to the engines. We’re not sure yet when we will order them. When we do, the plan is to phase out other ships in our fleet.

Roth confirmed the company had received US $3.7 million in incentive grants from energy infrastructure company FortisBC. The grant availability followed British Columbia’s Greenhouse Gas Regulation of 2012, with FortisBC announcing a US $46.2 million program for fleet operators investing in LNG power.

The political unrest in Turkey was unsettling at times. Overall, however, the Sedef yard was very good to work with, and the vessels will reduce our greenhouse gas emissions dramatically.

“The engines meet Tier 3 NOx emission limits when operating in gas mode, without the need for after-treatment. Seaspan Swift and Seaspan Reliant represent a further extension of the growing LNG-fueled fleet in Canada. In total, there are 14 vessels delivered or under construction, all with our dual-fuel engines,” Wärtsilä told NauticExpo e-magazine.

The 546 kWh energy storage system (ESS) consists of 84 lithium polymer batteries that can be recharged on-board or via shoreside links. Supplied by Canadian specialist Corvus Energy, the ESS is integrated with an Elkon propulsion and power distribution system and provides 2200 kW for 10 minutes, ideal for low-speed maneuvering and berthing.

Vessel delivery also presented challenges. “We were weather-bound to a certain extent and therefore took a southern route across the Atlantic,” said Redwise Maritime’s Willem-Jan Hamers.

“The main challenge for us, however, was to certify the crews in accordance with the latest regulations for low-flashpoint fuels, which include LNG. They were trained and certified in three stages by Wärtsilä in Finland, at Falck Safety Services in Rotterdam and at a marine college. They also went to Turkey to assist with and monitor LNG bunkering, as well as attend sea trials.”

The vessels also needed minor modifications for the voyage, including for pilot boarding due to the hull shape, and to comply with Panama Canal regulations. “The ferries behaved very well in all circumstances,” Hamers concluded.