A unique lithium-ion nickel manganese cobalt oxide (NMC) marine battery system that has a fully passive protection system and is intrinsically safe has been designed by Dutch specialist EST-Floattech. It has been DNV-GL approved for energy storage systems.

Called Green Orca and created as a result of EST-Floattech’s “Safe by Design” philosophy, the system has also been chosen by the Dutch Ministry of Infrastructure and Water Management’s Rijswaterstaat division to power its recently-launched, 40 m-long hybrid multi-purpose vessel, Merwestroom, built by Netherlands-based Bijlsma Wartena.

The first of three such vessels, it will patrol the Wadden Sea, marking shipping lanes, conducting measurements and monitoring fisheries among other duties. Describing the vessel as “a completely new challenge for us,” Bijlsma Wartena director Tjeerd Wiebe Bijlsma stated that Merwestroom is “Packed with sustainable technology, from water-based paint to solar collectors. The generators’ cooling water is also used for heating the crew space. And thanks to the battery pack, the vessel is also capable of carrying out daily work exclusively on the battery.” 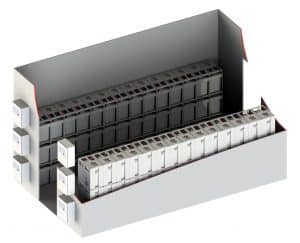 One of the dangers of using multiple lithium-ion battery cells is that a fire in one cell can trigger a runaway reaction across the rest. “It’s very important to have a solid, reliable safety system,” Paul van Wijk, EST-Floattech’s commercial director, told NauticExpo e-magazine. “Mostly, our competitors rely on active safety systems, such as fire extinguishers and water cooling. Most of the time that’s enough, but we went a step further and asked ourselves: ‘What if something went wrong aboard a vessel that caused a defect in those external safety systems?’

“For the last line of defense you need a system that does not rely on any electronic device or external system. It needs to be intrinsically safe. With Green Orca, any problem stays in one battery module—there’s no propagation to other modules.”

“We are the first with this kind of passive safety system and to have DNV-GL type approval for it,” he said. Green Orca has also been approved by the Norwegian Maritime Authority at the highest level, passing the Type 1 Propagation Test. “That’s also very important given Norway’s at the forefront of using maritime battery systems.”

EST-Floattech chose li-ion NMC batteries, “because of their high energy density and the all-round performance of the cell specifications,” Van Wijk added. “Given the limited space aboard ships, both are important.”

Depending on the availability of shore-side charging infrastructures and the nature of the vessel they’re fitted to—eg: hybrid systems available to charge the batteries—Green Orca cells can be swapped in and out via containers.

In April, EST‐Floattech received a major boost when Rotterdam Port Fund (RPF) announced it was investing in the company. RPF is an initiative of the Rotterdam Port Authority, NIBC Bank, Innovation Quarter, Koninklijke Doeksen, and Rotterdam entrepreneurs Peter Goedvolk and Luc Braams.

“For the last line of defense you need a system that does not rely on any electronic device or external system.”

“RPF’s participation offers us access to an excellent harbor-related network,” EST-Floattech director Trond Skaufel stated. “Our energy storage systems can not only be used in ships, but also in port cranes and lorries. The environmental benefits are vital. At the moment, we are looking at ways to store and re-use energy generated from operating cranes.” RPF’s Bastiaan van der Knaap commented: “Battery systems will provide a major contribution to energy transition in the maritime sector. We are convinced that EST-Floattech is ideally positioned to play a key role in that transition.”