We revisited the Ocean Cleanup Project five years after its startup to see where the revolutionary concept went after reality set in.

Many great ideas have stumbled over the threshold of reality. Making a dream come true is a tough transition, and not everyone makes it. But some do.

The full-scale Ocean Cleanup operation is planned to begin in 2020.

About five years ago, Boyan Slat, merely 18 years old at the time, went on stage in a TEDx Talk to present his device for cleaning up massive plastic pollution in the ocean. The video went viral, and international media immediately made the young man a star of the emerging environmental technology movement. Instead of searching for the plastic—an almost impossible task—his device was designed to let ocean currents bring the plastic into huge lenses, positioned on the open sea.

Shortly after, the project raised more than US $2 million in funding and hired a large and highly-qualified team. The team went about designing, building and launching a 100-km-long floating structure, able to remove 42% of the Great Pacific Garbage Patch’s plastic pollution over a period of 10 years.

Back in 2014, a year after the creation of The Ocean Cleanup, a 528-page feasibility study was published. Almost 100 scientists and engineers had been working on the study. The findings were described as promising, but the project received opposition from other scientists.

In an interview with The Guardian two years ago, Boyan Slat was confronted with criticism from a number of oceanographers and biologists. They felt that concerns about the environmental impact of the giant structure had not been dealt with properly. The critics also claimed that the technical challenges of meeting extreme weather conditions in remote ocean areas did not seem to have been solved.

Boyan Slat’s answer was that the Ocean Cleanup Project was trying to achieve something that had never been done before. “It’s 100 times bigger than anything that’s ever been deployed in the ocean,” he said. “It’s 50% deeper, and 10 times more remote than the world’s most remote oil rig. So obviously there are technical challenges.” 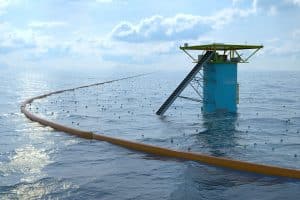 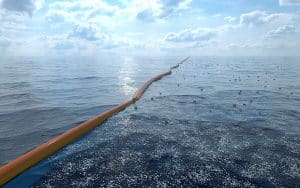 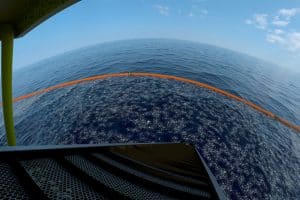 A series of expeditions were made in 2015 to measure the “vertical distribution”, in other words, how deep down plastic pollution actually takes place. The results showed that the concentration varies with wind conditions, but reaches close to zero already a few meters below the surface. The same year, the “Mega Expedition” left Hawaii, bound for California. Thirty vessels crossed the Great Pacific Garbage Patch in parallel, mapping 3,5 million square kilometers of ocean. The goal was to measure the amount of plastic, and the results were alarming: Around 80 million kg of floating plastic debris were found, accumulated in an area three times the size of France.

Next step was to perform model testing of the device, and finally, in 2016, the first oceangoing prototype was towed out into the North Sea. It was 100 meters long, only 1:1.000 of the final product, but still big enough to perform a real test in open water. One of the results of the North Sea test was to move from inflatable floaters to rigid HDPE pipes. Another major change to the original plan was to make the structure drifting instead of moored to the seabed. 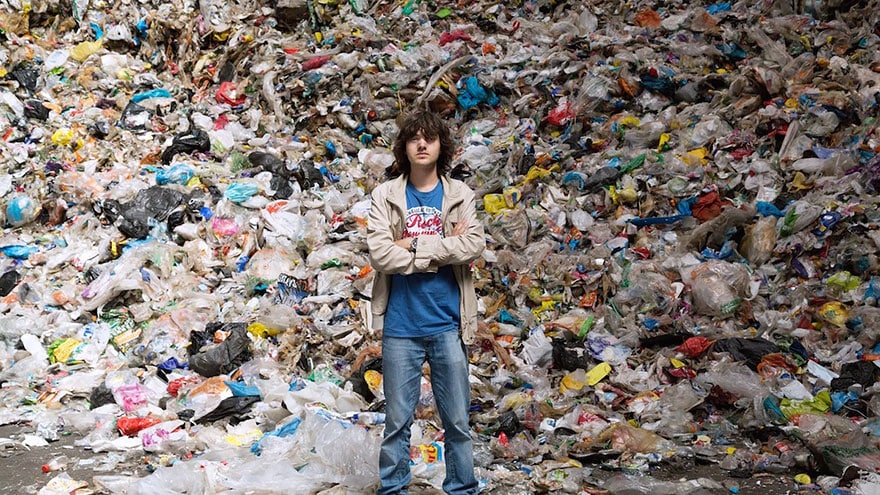 Plastic pollution is one of the biggest threats oceans face today. (Courtesy of The Ocean Cleanup)

The biggest pieces of plastic tend to escape the normal ways of quantifying plastic pollution, so the project group conducted a series of flights across the Great Pacific Garbage Patch. The goal was to find out how big a problem the so-called “ghost nets” (discarded fishing gear) really is.

Sailors reading this will probably ask themselves how boats are supposed to avoid collision with this device once it’s out there. We asked Monique Dassen, communication officer at Ocean Cleanup, this question. “The moving systems will be equipped with Automatic Identification System (AIS),” she said. “They will also be equipped with reflectors, to make them show up on radar.”

The full-scale Ocean Cleanup operation is planned to begin in 2020. The vision is for a plastic-free ocean by 2050.

Read more about slashing plastic pollution in the oceans in our latest issue.