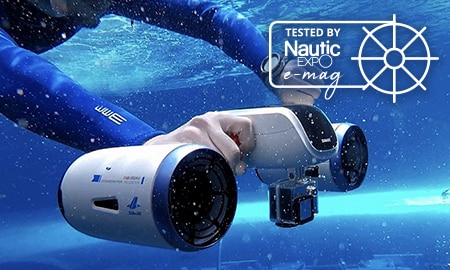 This battery-powered underwater scooter packed a mightier punch than its small size suggests when we tested it in the ocean.

The so-called world’s smallest underwater scooter arrived in two boxes about the size of a dozen wine bottles each—one contained the additional flotation device and the other the SharkMIX unit manufactured by Chinese underwater specialist company SuBlue.

Formerly a commercial underwater vehicle and robotics developer, the company has been producing a range of consumer devices since 2013. SuBlue general manager Liu Qi told Chinese media that the strong demand in the underwater vehicle sector in its target markets of Europe and America means it will produce 100,000 units in 2018 across its range that comprises SharkMIX, SharkNano, SharkMini and SharkMax models. 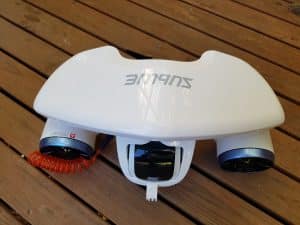 Our trial SharkMIX was their entry level unit that came with a 11,000 mah Li Polymer battery. It was put on charge for about two hours until the charge light showed green; giving one hour usage. In the meantime, we’d assembled the unit with the flotation device and attached the wrist strap. We even tried out the GoPro mount with our camera and it worked—apart from the fixing angle was a bit too downward facing. Build quality felt sturdy in toughened plastic and the four bladed propellers were deeply indented to avoid children’s fingers catching on them.

Then we went down to our local bay in Sydney Harbour to try it out. We were tempted to put on our diving gear but this small unit isn’t really designed or powerful enough for that (it has a propulsion force of 8 kg). But it’s ideal for snorkelers and free divers. Weighing in at only 2.85 kg and about the size of a radio controlled aeroplane, it is easy to handle.

Once in the water, it is buoyant and powered by pulling the twin levers simultaneously—there’s not much graduated power so mostly on and off—and using it was fairly intuitive. You simply swung your arms in the desired direction and the SharkMIX propelled you along at about 5 kilometres per hour. It sells for Euro 750.