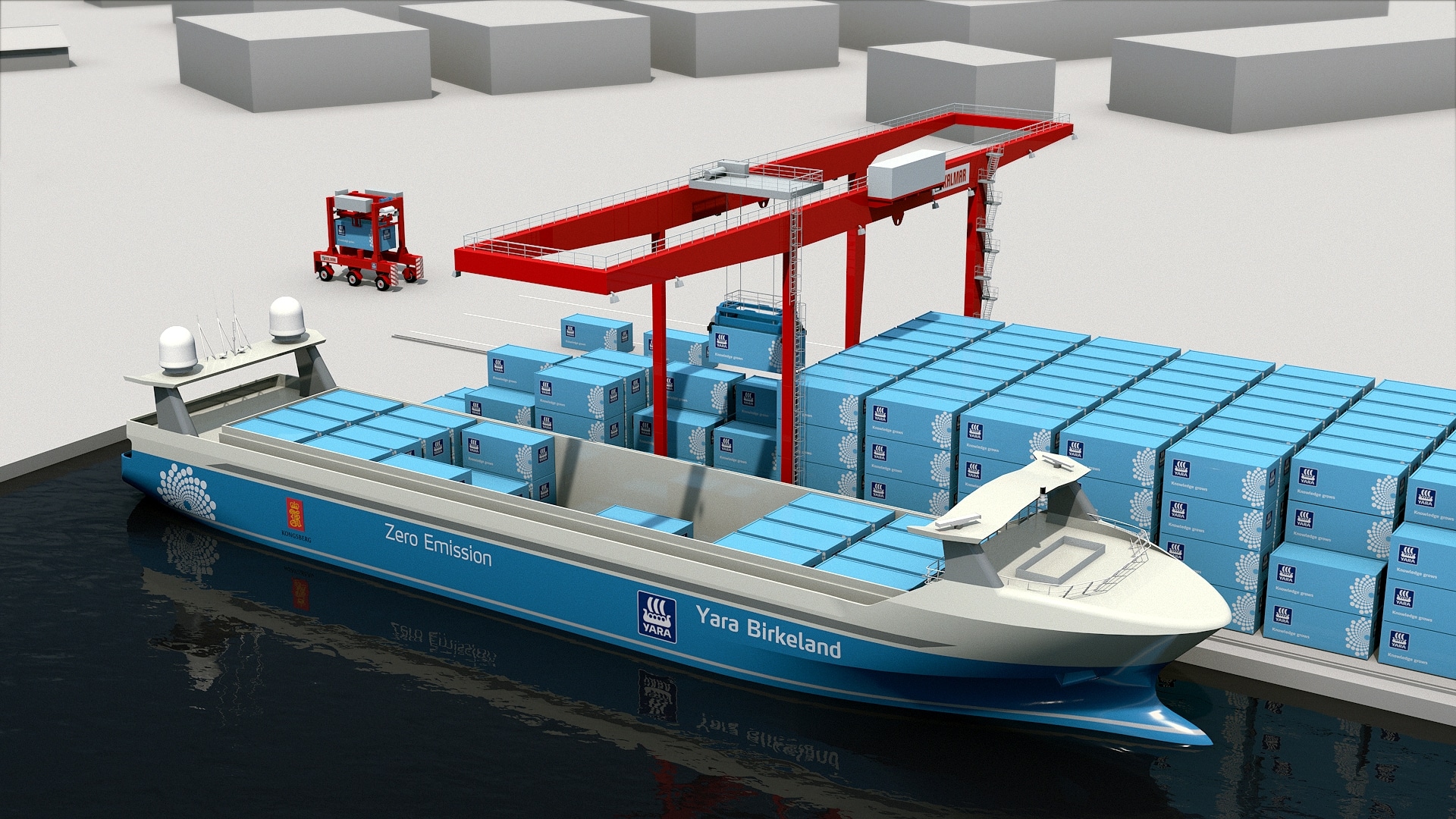 Scheduled for completion in 2Q/2020, the terminal is at Yara’s Porsgrunn facility in Norway. Cargotec subsidiary Kalmar will deliver fully autonomous loading and unloading equipment, software and services—including transportation between the fertilizer production facilities and the quay—for this unique project.

Yara Birkeland will gradually move from being manned to becoming a fully autonomous operation by 2022.

Yara Birkeland is the world’s first autonomous and electric container vessel, as NauticExpo e-magazine reported here. The ship will slash emissions, improve road safety and cut congestion by removing up to 40,000 truck trips annually. It will transport fertilizer from Porsgrunn via inland waterways to the ports of Larvik and Brevik.

Yara Birkeland will be built by Norwegian shipbuilder Vard under a NOK250 million (US $29.6 million) contract signed on August 15, this year. Fittingly, as the Norwegian government innovation & technology agency ENOVA is backing the project with NOK133.6 million, the country’s prime minister Erna Solberg was present at Vard’s Brevik yard for the signing ceremony. Vard will deliver Yara Birkeland for launch in early 2020, and the vessel will gradually move from being manned to becoming a fully autonomous operation by 2022.

Terminal Equipment Will Also be Electric

Like the ship, terminal equipment will also be electric. Kalmar will provide an automated rail-mounted gantry crane (AutoRMG), three FastCharge AutoStrad straddle carriers, a FastCharge charging station, and related automation and safety systems. The solution will be implemented in phases, with the level of automation gradually increasing. The end result will be a fully autonomous, mixed-traffic terminal. Watch a video here.

Speaking to NauticExpo e-magazine, Tero Kokko, Kalmar’s senior vice president, automation and projects division, explained further: “The AutoRMG was launched in September 2017 and the one we’re supplying to Porsgrunn does not vary much from our product offering. In June, we also received another big AutoRMG order from [Australian logistics park] Qube Moorebank.”

In terms of transportation between the fertilizer production facilities and the quay, containers will be carried by the all-electric straddle carriers [AutoStrads], which will be powered by our FastCharge charging station.

The whole solution is 100% zero emissions and Kalmar will also support operations with a full-scale service contract, including an availability agreement as well as preventive maintenance for the AutoRMG crane. Furthermore, our personnel will provide operational, automation, and software support for the whole solution.

Kokko was unable to tell us how much the terminal will cost and could not comment on whether any government agency was supporting the project. Norwegian government enterprise ENOVA, which promotes the environmentally responsible production and consumption of energy, did support the Yara Birkeland ship newbuild with a US $16.7 million grant.

Given that this is a unique project, NauticExpo e-magazine asked what challenges Kokko faced:

Naturally, weather conditions can be challenging in Nordic countries and set certain requirements for the design. Another challenging area is mixed fleet traffic with automated machines.

For example, he explained, “the AutoStrads will drive along public roads in the Porsgrunn industrial park, which is also used by normal road traffic. We are working closely with local authorities and other parties to ensure the safety of passengers and vehicles at all times.”