Home » SEAir—Foiling for the Masses 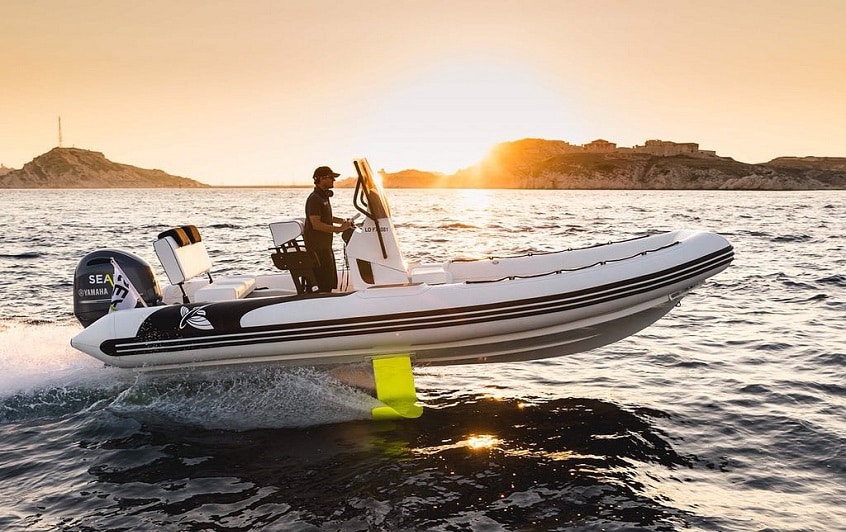 Foils are being fitted to racing yachts and even superyachts but have a longer heritage on motorboats, a fact that attracted French company SEAir to this category.

Elevating a vessel above the water to reduce drag is a basic principle of physics and something that has been used since the early 19th century. Since then this technology has been boosted by the military during the world wars and especially the post-war period when passenger hydrofoils proliferated globally, probably reaching their peak in the 1970s when even the rough seaways of the English Channel saw a brief service.

Their popularity waned, however, due to their expense, fragility and heavy weather limitations. Fast forward to the millennium—where computer-aided design, digital fluid dynamics and a raft of other technologies, such as carbon fiber, plus huge research budgets from commercial yachting syndicates—have all helped to renew interest in this area.

Foiling for the masses is SEAir’s plan and no special skills are required to drive one of these flying RIBs.

Commercial yachting was where French startup SEAir first gained a name for itself with its prototype Mini 650 that was associated with the pioneering Mini Transat 2017 Race. This transatlantic race in tiny 22-foot yachts is credited with pioneering many innovations—such as canting keels, rotating masts, scow bows and now foils. Among the sailors involved with the Mini 650 was David Raison who is the naval architect for the foiling SEAir Mini 747, a project that didn’t race in 2017 but is available for the 2019 event. Raison also designed the scow-bowed Minis Magnum launched in 2010 and the spin-off Maximum 865 launched in 2014.

This expertise will be used on the upcoming SEAir 40 yacht which is under construction but a non disclosure agreement prevents the company from sharing details about it, company founder Richard Forest told NauticExpo e-magazine when we met at the Cannes Boat Show in September.

Along with Bertrand Castelnérac and Benoit Lequin, Forest formed the company two years ago to explore various foiling projects. Castelnérac and Lequin are experienced sailors; Lequin, who is in charge of engineering, holds the record for crossing the South and North Atlantic in an open catamaran. It was while watching support boats struggling to follow race yachts at a 2015 event that Castelnérac realized the potential for creating a foiled rigid inflatable (RIB). Then, as a company, the ingenious idea of retrofitting boats with foils solved many problems including the high costs.

Collaborating with leading French builder Zodiac, the SEAir RIB was constructed in 2017. Created by the construction of a fiberglass hull box and carbon foils that are computer-controlled and retract as required, these elevate the bow while an extra fin on the outboard engine creates lift and stability aft. 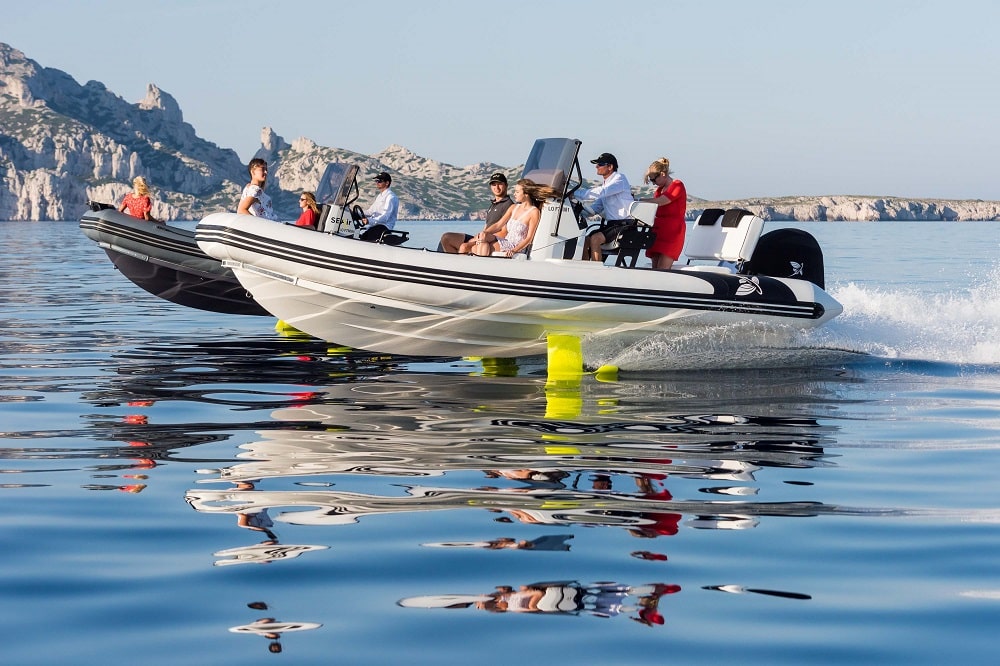 NauticExpo e-magazine took the SEAir RIB for a sea trial off Cannes. It was powered by an 115 HP Yamaha outboard. Moving in displacement mode (with foils deployed) there was no difference in feeling from other RIBs until about 15 knots when the bows rose quickly as the foils elevated the RIB clear. Reaching 20 knots the steering became perceptibly lighter and even more so as we sped to 35 knots where steering changes had to be carefully done, such was the nimbleness of the SEAir.

Fuel efficiencies are an attraction and the company claims a 30% saving over a similar displacement vessel.

Console controls are a trio of switches that raise and lower the foils and change their angle of rake, while the outboard trim is another crucial factor when flying the foils. Just like the hydrofoilers of the 1970s, fuel efficiencies are an attraction and the company claims 30% savings over a similar displacement vessel; but a major benefit is a smoother and generally faster ride.

Foiling for the masses is the plan of SEAir and no special skills are required to drive one of these flying RIBs, said company founder Richard Forest in an interview with NauticExpo e-magazine. “We are in production and have supplied several vessels and are able to customize these boats according to which sector they are going to.”