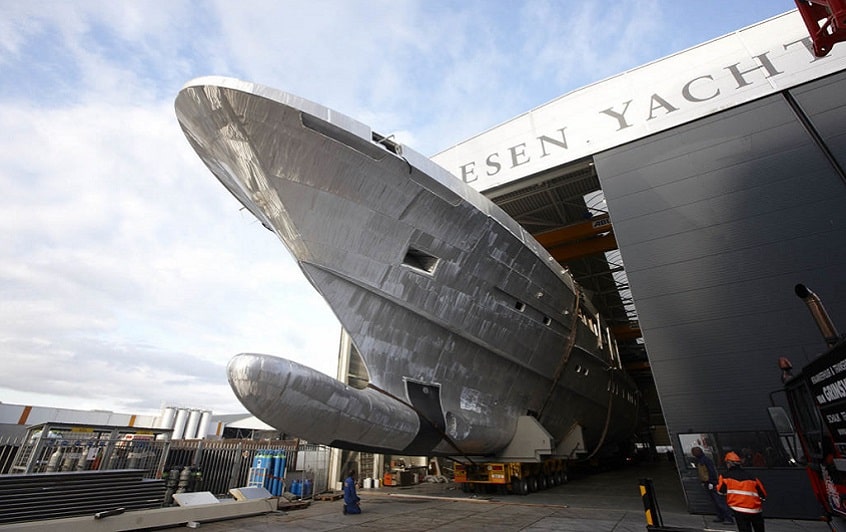 She’s called Cosmos, weighs in at 1,700 gt, is being built by Netherlands-based Heesen Yachts, will make at least 29 knots, and has been sold even before her keel has been laid. She’s also another sign of the prominence of the Dutch superyacht industry.

Cosmos will be built in Heesen’s new 90-m-long ship construction dock—it’s so large it’s been nicknamed “the cathedral.” “We’ve completed the tank test and propeller test and will lay the keel in February,” a Heesen spokeswoman told NauticExpo e-magazine. “And yes, Cosmos is sold, but the price is confidential as it’s a full custom yacht. She will be delivered in April 2022.”

Details were announced at the 2018 Monaco Yacht Show in late September. The brief was for speed and size, coupled with the aesthetic appeal of a contemporary sports car. As an under-construction newbuild, Cosmos won’t be exhibited at METS. The spokeswoman explained:

That combination of speed, aluminum, and length required us to devise new methods of bringing longitudinal strength into the design without adding extra weight.

Cosmos is the fastest full-aluminium motoryacht with a conventional propulsion system in the world. (Credit: Heesen Yachts)

“We developed and patented The Backbone, which is reminiscent of an I girder and far stronger than a flat metal bar: you can bend a flat bar but you can’t bend an I beam,” she added. Cosmos will be powered by four MTU 20V diesel engines, developing a total of 19,000 hp and driving two controllable pitch propellers on a fast displacement hull form devised by van Oossanen.

She’s the fastest full-aluminium motoryacht with a conventional propulsion system in the world. Her estimated top speed is 29 knots, but this is conservative: she may reach above this during sea trials.

Heesen is working with British company Winch Design on the yacht’s exteriors and Dutch studio Sinot for the interiors. Sinot also worked with Heesen on the interiors of its iconic, 2016-built 70 m Galactica Super Nova. Exterior features include a 270 m2 sun deck; a flushed foredeck that doubles as a helipad for a Eurocopter EC135 and an outdoor cinema; a 7 m pool with contra-jets for swimming, a waterfall and a glass bottom; and a “beach club” with a sunken walk-around bar.

Sinot’s interiors are inspired by elements from nature, including such natural mathematics as the Fibonacci sequence, offset with the use of backlit onyx; crystal glass panels; straw marquetry; hardwood flooring; silk carpets; natural leather wall panelling; and stainless-steel, including a spiral staircase that wraps around a full glass elevator.

Twelve guests will be accommodated in four suites on the lower deck, a VIP room with adjacent private studio on the bridge deck, and a striking master stateroom on the main deck forward. The 19 crew will be housed in 11 cabins.

The Superyacht Market on the Rise

As METSTRADE told NauticExpo e-magazine, many of the new yachts sold between 2015-2017 were built on speculation or sold from stock. “If we drill down further to the 30-60 m size range—where most of the on-spec action happens—the share has actually been creeping up, from 40% in 2015 to 48% in 2017. Perhaps this can be seen as a sign of an improving market for new yacht sales?”

Last year, Dutch yards’ share of the superyacht market was well over €1 billion.

Heesen has undoubtedly found a niche. It has delivered three yachts in 2018 and has an order book that’s full until 2020. Since recovering from the 2007-2008 recession, superyacht trends are for more luxurious, larger ships and Cosmos’ features reflect those now being found on newbuild cruise liners.

Average superyacht prices have risen to a record €57 million as a result with Russian and American buyers accounting for about 40% of the market. Last year, Dutch yards’ share of the superyacht market was well over €1 billion, giving the country some 30% of the roughly €4 billion global annual sales. Heesen has an answer for the rise in sales:

When you’re out at sea, a yacht is completely private—it’s the perfect way to relax and be with your family.