The Glowing Dock Building in Vancouver 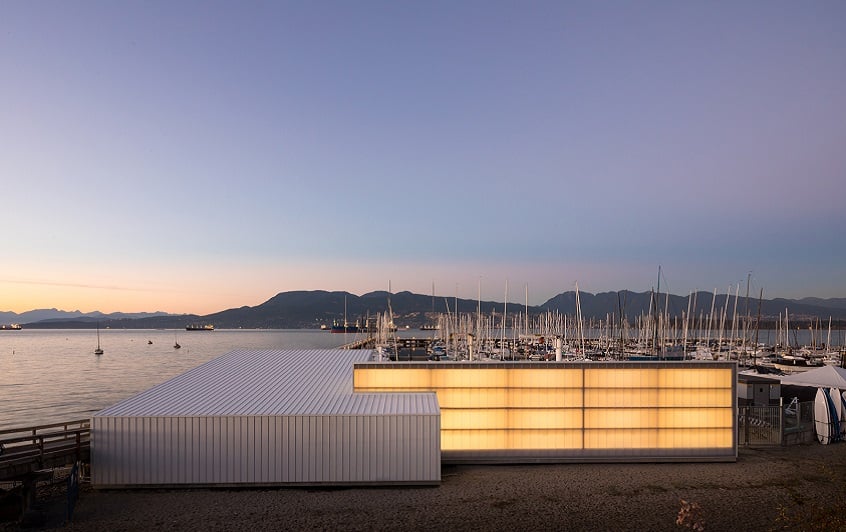 The Dock Building in the Canadian city has just won the Special Jury Award of 2018 from the Architectural Institute of British Columbia (AIBC).

Even people who are not at all interested in boats and yachts cannot keep their eyes off the new Royal Vancouver Yacht Club‘s Dock Building. The reason? With its clean, beautiful modern look the building is an example of what can be achieved when talented architects and enterprising clients work together – even when the budget is far from “royal.”

Designed by Michael Green Architecture, a leading local company, and completed in 2017 after two years of work, the Dock Building is located by Vancouver’s Jericho beach and services a large marina. Its facilities include a variety of workshops to maintain boats, sails and gear; washrooms and showers; offices for the Harbour Master and an educational space for children. Michael Green, CEO and president of the firm, explained in an interview with NauticExpo e-magazine:

The Yacht Club did not have any preconceived ideas or a unanimous brief for us to work with. As there were many different ideas among the members, some of them engineers and architects, we realized it was going to be impossible to please absolutely everyone considering the modest budget. So a team of selected club members was created to help us with the specifications related to the working needs of the building. 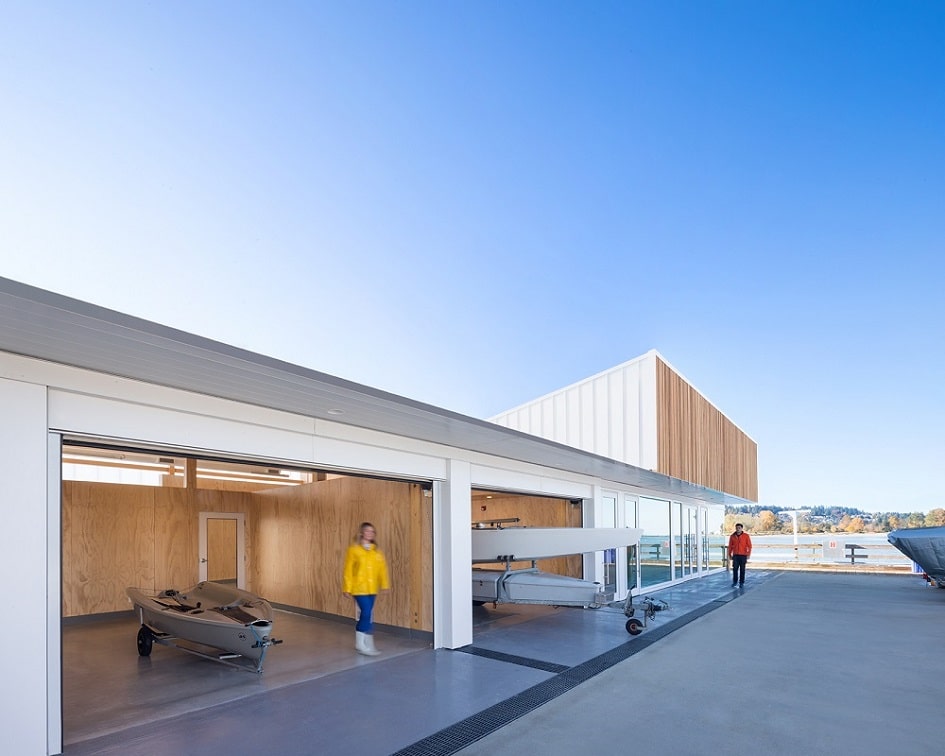 Because the building is situated where the high tides meet the beach, almost half of the budget went into its foundation and the glulam piles set deep into the ground. This came as no surprise—and not because of any technical problems. Green explained:

The amount of contractors and designers that work on foundations is very limited. There is a lack of competition in this field, so from the very beginning we were fully aware of the fact that this part of the project was going to be very expensive.

Hard to Make it Simple

With the remaining resources, the architects came up with a clever design that reconciled modernity with the industrial heritage of the site. Two large and irregular rectangular masses interlock to form the building. Facing land is a glulam and translucent polycarbonate wall that lets in sunlight (and heat to help dry the boats and gear) during the day and emits light at night. 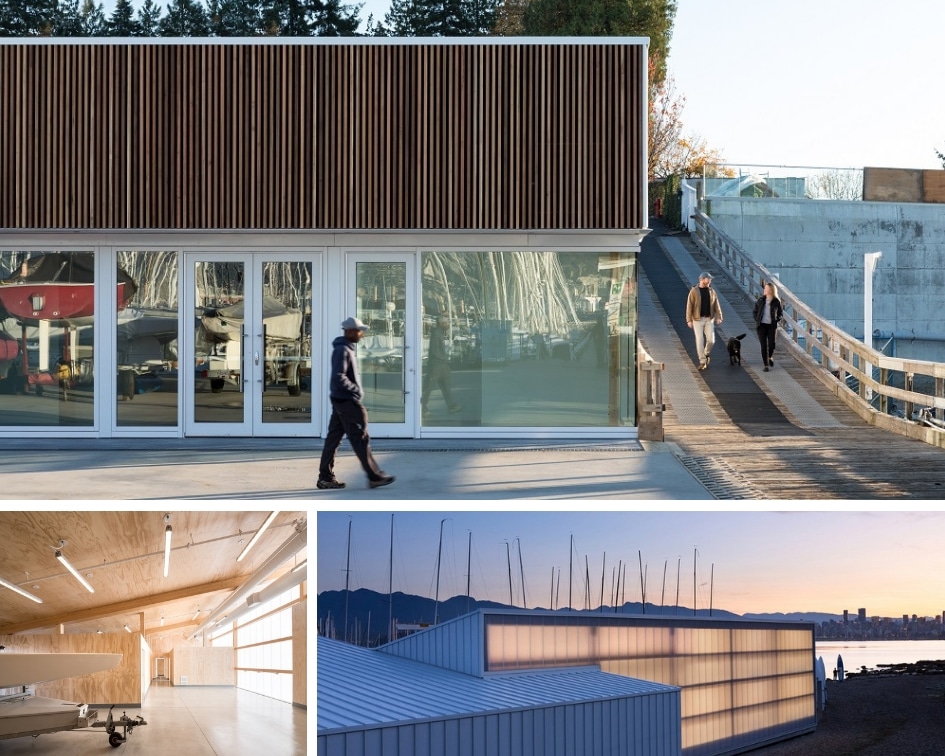 Facing the sea and the marina itself are glazed offices for the management and a series of doors that open up to the waterfront, allowing access to the boats. A wooden panel above the offices discreetly hides the mechanical systems. Keeping the design simple and clean was something the architects aimed for from the very beginning of the process. And that didn’t make their lives easier—on the contrary. Green added: 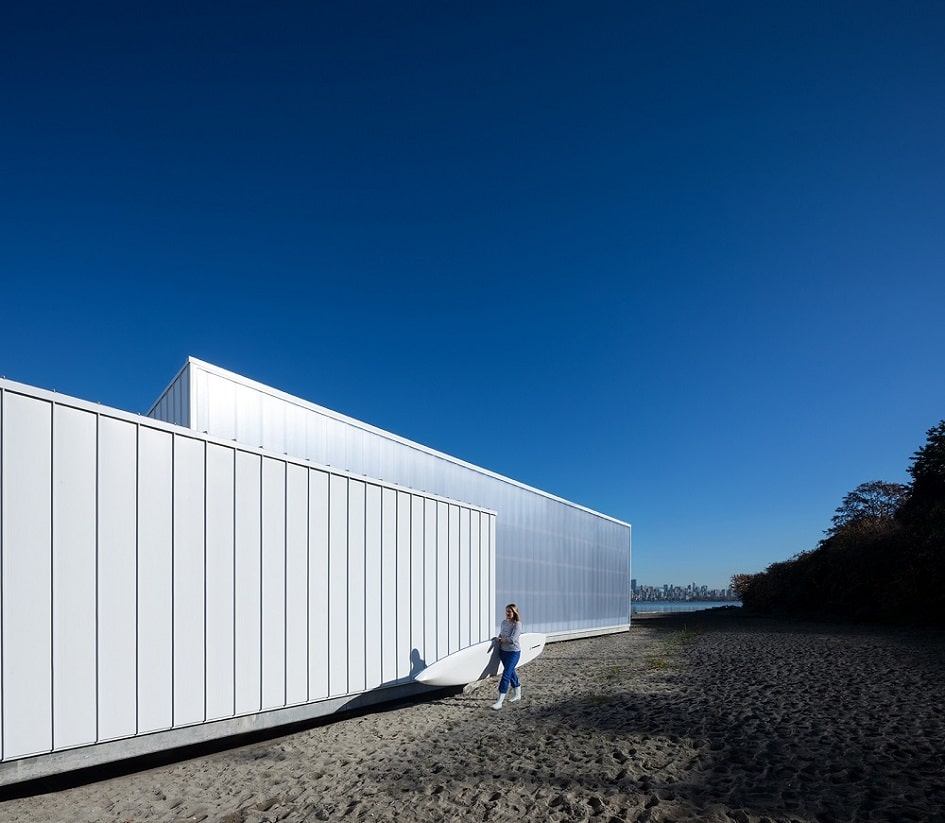 The interior is predominantly made of construction-grade plywood, providing a tough but easily replaceable interior finish. Details throughout the interior are modest and practical due to the limited budget and the building’s working needs. Green said:

The Dock Building design demonstrates that all projects from working industrial buildings to boutique museums can and should be realized with grace and architectural dignity.